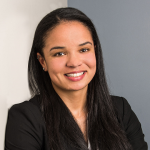 Prior to joining the Law Offices of Jezic & Moyse, LLC as a criminal defense and immigration associate, Ms. Demougeot served as Law Clerk to the Honorable Beverly J. Woodard of Prince George’s County Circuit Court.

Ms. Demougeot received her law degree from Wake Forest University School of Law in Winston-Salem, North Carolina. During law school she gained experience as a Student Attorney by participating in the Innocence and Justice clinic, where she worked to prove the innocence of an inmate serving life in prison, interning at the Forsyth County State’s Attorney’s office and Legal Aid.

Ms. Demougeot received her undergraduate degree in 2011 from Vassar College in Poughkeepsie, New York, where she was captain of her Varsity soccer team three out of four years and competed in Varsity Track & Field.